What is a sloth?

Sloths are highly successful, slow-moving mammals that spend their lives hanging about in the trees of Central and South America. There are two types of sloth. They look quite different and are defined by how many digits they have. 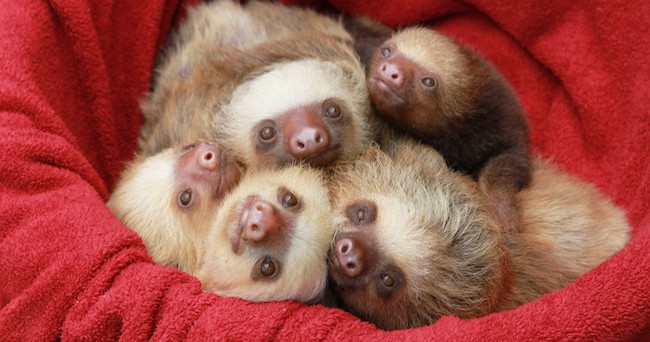 Two-toed, Choloepus sloths actually have three toes, but only two fingers and look like a cross between a Wookiee and a pig. There are two species of two-toed sloth and neither is considered endangered, although their jungle homes are being chopped down at an alarming rate. 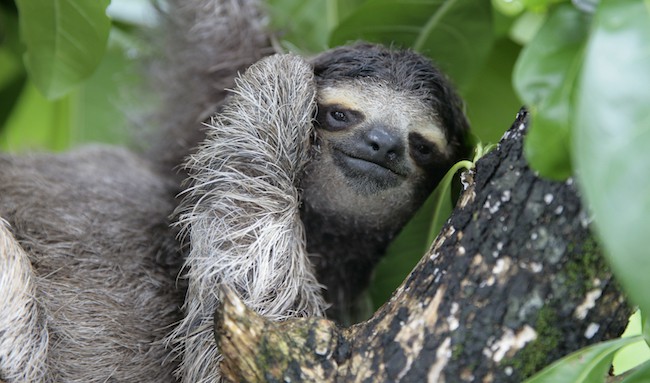 Three–toed Bradypus sloths, have three fingers and three toes, mullet haircuts and Mona Lisa smiles. There are four species including the critically endangered Pygmy sloths that are only found on a single island off the coast of Panama.

Bradypus and Choloepus sloths are quite different animals, only distantly related like cats and dogs. Bradypus for example have extra neck vertebrae that enable them to turn their heads through 270 degrees and become excellent, if somewhat unlikely, swimmers.

Sloths’ closest relatives are anteaters and armadillos. Together they belong to an ancient group of mammals called the Xenarthra, which makes them sound like they come from outer space and they have the sci-fi looks to match. The Xenarthra owe their oddness to the fact they evolved in isolation around 80 million years ago when South America was still an island. They were once a hugely successful group that included a giant ground sloth, Megatherium, the size of an Asian elephant. This majestic creature was probably hunted to extinction by man following the last ice age.

The sloth’s slothful nature is down to its diet, which consists mostly of toxic leaves that take a long time to digest and provide little energy. In fact it can take a sloth one whole month to digest a single leaf. If they did so any faster they would literally poison themselves.

To help with digesting they have a multi-chambered stomach, much like a cow, the contents of which can take up a third of their body weight. They also need to rest. A lot. They say that sloths spend 60% of their time resting. They’re not being lazy – they are busy digesting their dinner.

A sloth’s body and biology are perfectly evolved to spend minimum energy. Curved claws and a strong grip allow them to hook on and hang – like a living hammock. An efficient design that means they only need half the muscle mass of regular mammals. Their metabolism is half that of mammals of a similar size and although they are warm-blooded they keep themselves warm by basking in the sun like lizards do.

Sloths do everything upside down – eat, sleep, mate and even give birth. As a result their fur grows the opposite direction, away from their extremities and with a parting on their tummy. Each hair has a groove down the centre, which allows algae to grow inside it and give the sloth a wild green look. 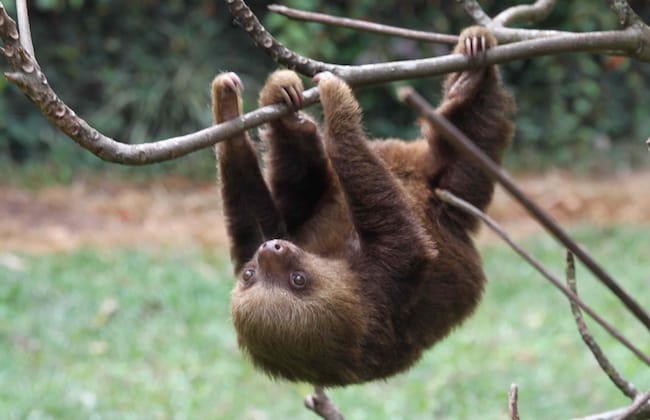 The coat of a sloth is basically like a mini jungle with not just algae but several resident insect species including a moth that only lives on a sloth. They have no natural body odour so they look and smell just like a tree. This helps them blend in with the forest and avoid being eaten by their number one predator – the Harpy eagle. 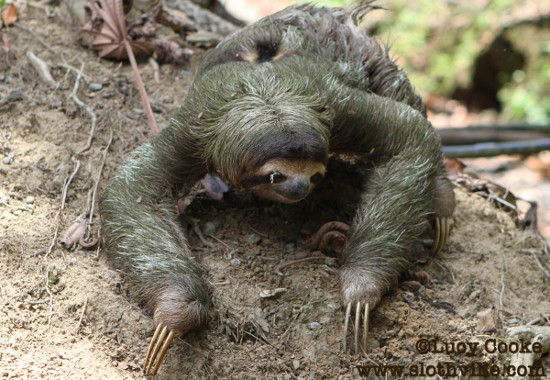 Sloths rarely come down from the trees except for once a week to go to the bathroom. Why they should make themselves vulnerable to land predators like ocelots by coming to the ground was long considered one of the great mysteries of sloth behaviour. It is now believed they do so to leave scent messages for potential mates.

Wild sloths are solitary animals that only coming together to mate – a surprisingly swift affair that lasts just a few seconds. Sex it turns out is the only thing sloths do quickly. Little is know about sloth reproduction but it is estimated that females are pregnant for six to eleven months and have one baby a year. Baby sloths are born to hug and cling to their mother for their first 3-8 months.

Mother sloths can be protective, but can also appear neglecting. Mothers have been known to hiss and claw at potential threats to protect the baby. However, baby sloths occasionally fall from their mother, and though the fall may not kill them the mother does not always come down to rescue them. This seems uncaring to us but it suggests that the chance of being eaten for a sloth on the ground is far too high to risk for a fallen baby. Or it might be that the mothers sense that the babies that fall have something wrong with them and are in fact unlikely to survive. 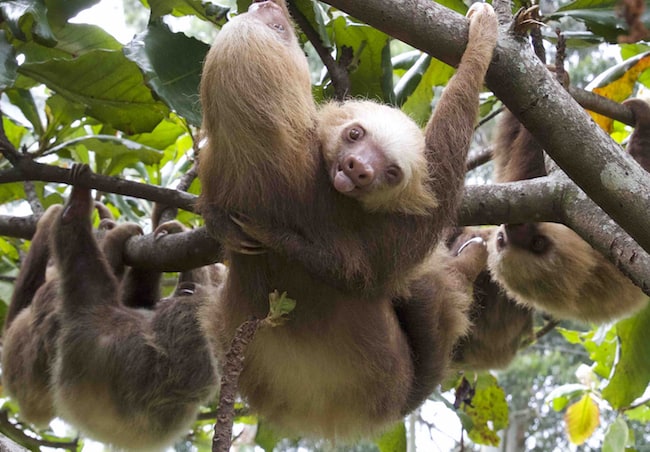 These babies sometimes end up being rescued by humans and brought to sanctuaries to care for. But don’t be fooled by the cute, smiling photos – orphan baby sloths are very hard to keep in captivity and would make terrible pets. Bradypus babies are especially hard to keep alive as they will only eat the leaves form a handful of trees that only grow in Central and South America. They do not like being handled by humans and can die easily from stress, so if anyone ever offers a sloth for you to hold for a selfie or a hug, please say no. They may look like they are smiling, but they do not enjoy being kept captive or petted.

For those that do survive it is crucial they are rehabilitated back into the wild or they face a lifetime of up to 45 years in captivity – no place for an animal which has evolved to patrol a home range of several hectares. 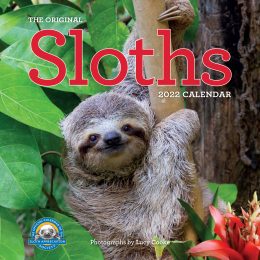 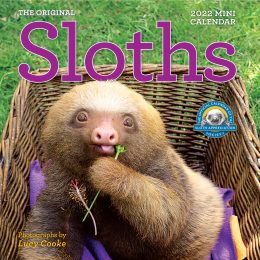 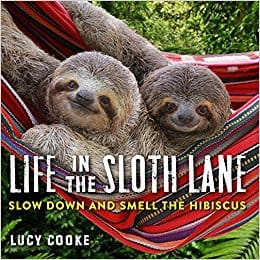 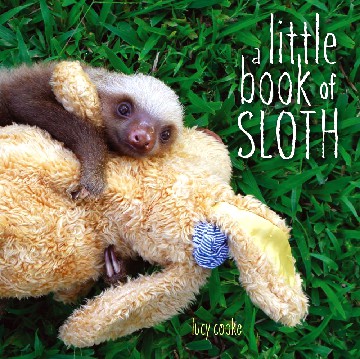 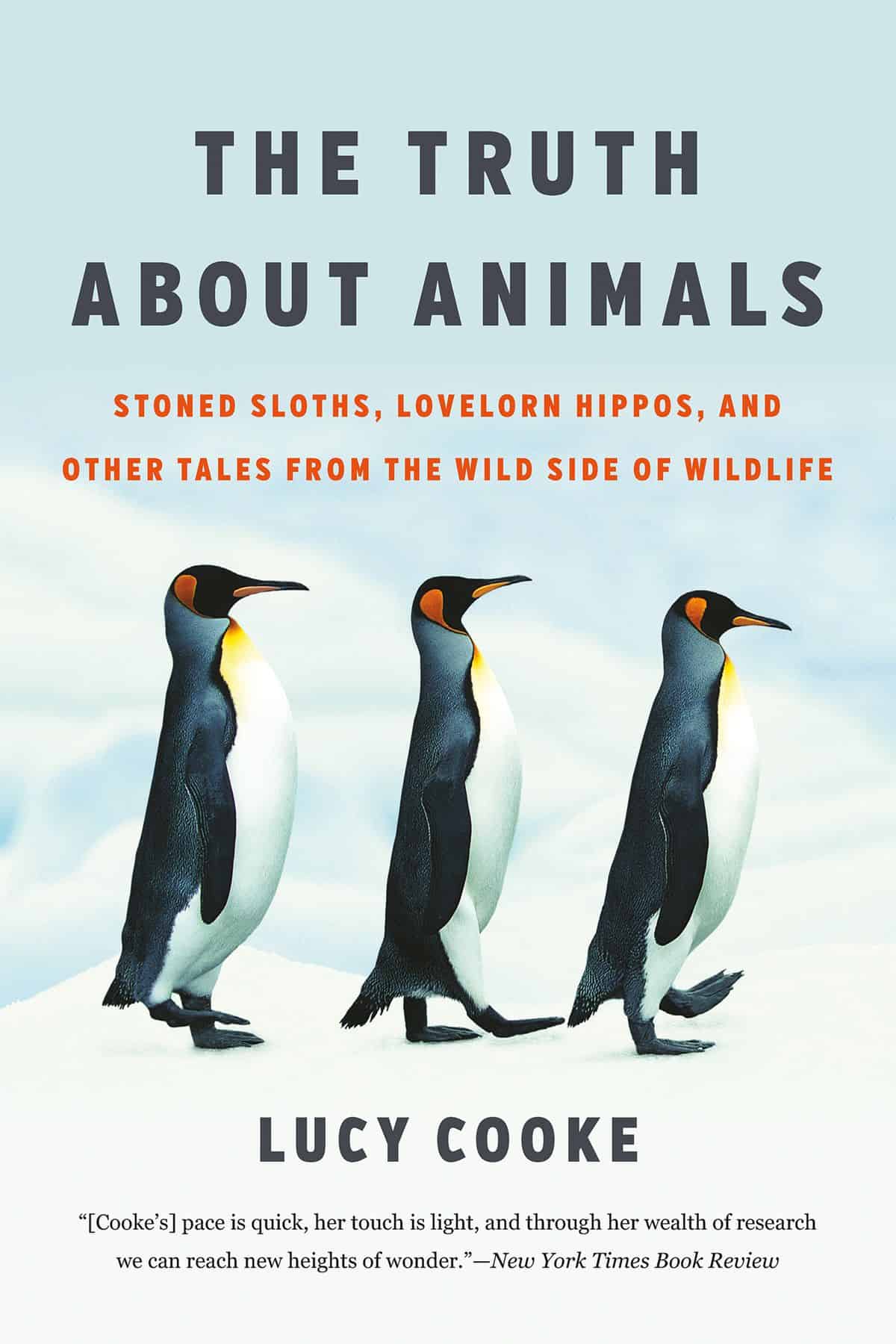 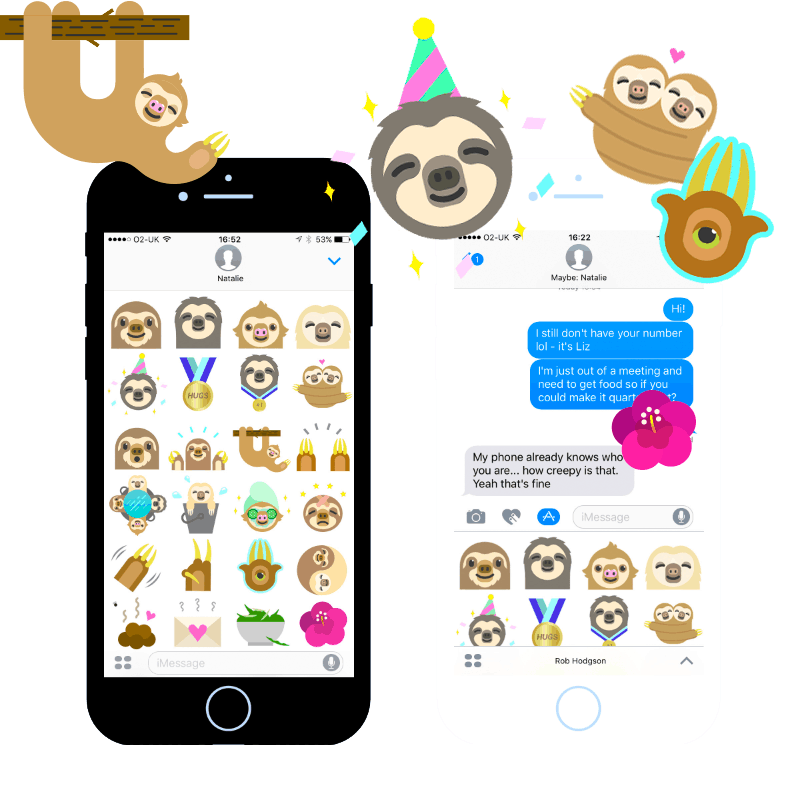